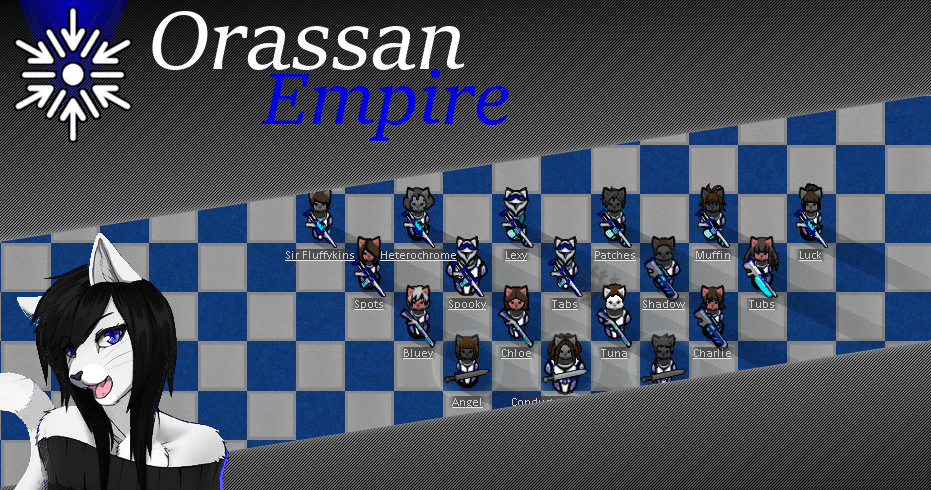 Adds a space cats faction. They like the cold. They hail from a planet that could be described as an arctic nightmare to humans, but it is nice and cozy to the cold-loving cat people. After developing FTL travel they have decided to unite their home planet and expand their empire at an unprecedented speed. While generally friendly, they will not tolerate kidnapping their people and they may be upset due to you encroaching on their territory.

Requires new game for the faction to spawn unless you have Faction Discovery by Orion.
I recommend that you use the Hospitality mod if you don’t want to kidnap the space nekos to recruit them.
Two of the hairstyles were modified from Rimsenal Hairpack.

Update to A18 thanks to ChJees (C#)
Update 1: Fixes to Ear alignment for side views, Orassans can start as a normal player colony, changes to Orassan weaponry recipes
Update 2: New firearm. New weapon sounds, courtesy of Xen
Update 3: Cat’s Eye berries added (analagous to coffee). Catnip and the new plant can only be grown by Orassans now.
Update 4: Orassan agrarian techniques have been added
Update 5: Various bugfixes
Update 6: New textures and weapons, and added Neo-Concrete. You make Neo-Concrete at the stonecutting table with rock powder (made from stone chunks.)
Update 7: New Hazmat suit by Arnolidos and new weapon textures by Shotgun Frenzy
Update 8: New melee weapon and a type of power generator. The generator must be made on top of a Betharian stone deposit, which can only be detected by a drill after building a ground penetrating scanner.
Update 9: Ear offset finally fixed. Balance changes.
Update 10: Added a light alternative to the exoskeleton armor. Texture by Arnolidos
Update 11: Added production table, backstories, added new tails for gene warriors, and fixed minor bugs

Known Bugs:
Slaves may show up with Orassan hairs and tails, potentially even backstories, but will remain human

*Prepare Carefully only sorta works; it has problems with new bodyparts (tails) as well as trouble with presets

Patches can now be loaded as mods now; make sure that they load under Orassans and the mods you’re patching. They are not standalones and require Orassans and either EPOE and/or CR to function.

Finding a game interesting after investing 300 hours into it can become a bit challenging. But with mods as long as there is a new update is assured, you are guaranteed a few more hours of new exciting gameplay. Our website offers you exactly that, a way to breathe life into your Rimworld gameplay through an expansive catalog of Rimworld Mods. Our Rimworld Mods are rigorously tested for all types of bugs and viruses. So that our users would feel safe when installing a Rimworld Orassans Mod. If you are feeling bored we have a Rimworld Mod called Alien vs predator for you to enjoy. This mod is based on the commercially successful movie with the same name and offers a plot similar to that of the movie as well. With the mod installed, you play as a race of predators that research, develop, and create new weapons and armors to combat a swarm of aliens. Another mod called the lord of the rims throws you into the lord of the rings fantasy world. This mod when installed limits your technological advancement to medieval times thus eliminating a huge chunk of items, buildings, and techs. The Orassans mod will remove and add certain features to make it seem like a lord of the rings game. To add creatures like elf, dwarf, and hobbits you will have to download a mod for each of them through our website. There are still a ton of other transformative mods available on our website that will change the entire map into something new.