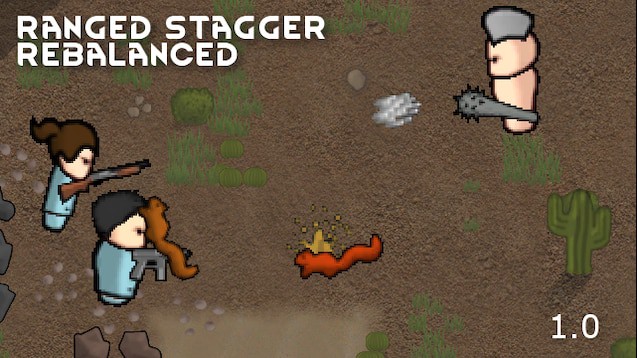 Reworks all the Vanilla weapons. Maintains the vanilla function of every firearm, nerfs firing at point-blank range and reworks the Charge Rifle.

This mod intends to be a very simple, but welcome addition to vanilla gameplay. It has no additional features, other than simply rebalancing weapons for better, more realistic feeling. Perhaps the spotlights of Weapon Rebalancing are:

* The work to make and materials required to craft weapons were largely unchanged. You won’t have differences in these instances between before and after you installed the mod.

* Using ranged weapons in touch range (Also known as firing at enemies melee’ing your pawns) is now heavily nerfed. The larger the weapon your pawn is carrying, the more the accuracy penalty for shooting at someone directly close to it. This is even truer with bows, since drawing, aiming and shooting at someone too close for confort is a real challenge. However, smaller weapons, like a Pistol or a Machine Pistol, are more efficient in this endeavour since they can be controlled easier than a long-barrel sniper or survival rifle.

* The Charge Rifle is redesigned to not be a glorified Pump Shotgun. It now has the same range as the Machine Pistol, and functions like a flexible, shorter-range Assault Rifle. The damage has been nerfed to nearly half to compensate all the goodies it received, however. So whenever you equip a pawn with a Charge Rifle, you’ll notice that it is severely lacking in power compared to the vanilla one, but in exchange it will fire from further away, with lesser cooldown between shots, more accurately.

* Most of the weapons received an increase in their bullet speed. Real-life ballistics from bullets were used to calculate this, and they now move at about 90% of their muzzle velocity (since bullets cannot lose their speed through their lifetime without use of scripts in Rimworld). For instance, the vanilla Pistol and heavy SMG were calculated using a .45 ACP, a slow-moving, but heavy-hitting projectile, while the Assault Rifle uses the 5.56x45mm, a very fast-moving projectile that moves about twice as fast.

– Short Bow
The Short Bow remains the original low-value, initial ranged weapon for pawns. It has received a nerf in its damage and range, but has been buffed slightly in accuracy with targets at short-medium ranges (how they were supposed to work) and target acquisition time (warm-up).

– Great Bow
Great Bows were massively overpowered due to their insane damage and huge damage output even when you are kissing tribals. These weapons are now very inaccurate at touch range (how they should be). The damage was reduced, and now the weapon is more accurate at longer ranges. The arrow now moves faster than short bows.

– Pila
The massive damage of the Pila was heavily nerfed. Since Rimworld counts arrows and flying spears as weapons that can potentially amputate arms
and legs, there’s nothing I can do but reduce the damage output of these. They are now useless in touch range, but still deadly in short to medium range, which is where it is supposed to shine.

– Pistol
One of the few weapons with very few changes. The accuracy changes were simply rounding numbers. It is one of the few ranged firearms which the
Touch accuracy remained high.

– Pump Shotgun
Though it was heavily nerfed on Touch range (like all larger firearms), the Pump Shotgun remains largely unchanged from before, with the exception
that on long ranges it is not as efficient anymore. The bullet speed change was massive, with buckshot now travelling more than twice as fast
as before.

– Machine Pistol
Buffed mostly to operate slightly better at short and long ranges, the machine pistol is now an all-around firearm, like it is supposed to be. It now
fills the niche as a firearm which can be used quite well in nearly every range, with the exception of long-range fires, where it falls off, like planned. To show how these firearms usually had lower recoil, the cooldown was buffed, as well.

– Heavy SMG
Changed to become a less brutal change from the PDW, but at the same time an upgrade.

– Survival Rifle
Heavily nerfed in Touch range; a longbarrel, bolt-action rifle shouldn’t be used in touch-range. However, it was still slightly buffed in longer range. Predicting from the Combat Realism mod, the .303 British cartidge has muzzle velocity close to the 5.56x45mm.

– Assault Rifle
Largely unchanged from vanilla, with slight buffs to short and medium range shots, but a slight nerf to longer range. Damage was increased to better
reflect the lethality of firearms of this caliber. Being a longbarrel firearm, accuracy in touch range has been largely nerfed; still, operating a fully automatic weapon in melee helps slightly, when compared to the survival rifle.

– Sniper Rifle
Lower damage output, but also a lower cooldown. As any other longbarrel weapons, it is now inefficient in melee range, resulting in drastically lower accuracy. However, since it is the king of long range firefights, it has been buffed slightly in this regard. Surprisingly, the .454 Lapua cartidge (the one used for the Sniper Rifle) is slower in velocity than the 5.56mm. To reflect that, the Sniper Rifle’s bullet speed is only slightly increased.

– LMG
With few changes to accuracy values, the LMG remains being a short-medium range beast. To better reflect that, it was slightly buffed on shorter
range accuracy. Damage for this weapon was buffed, to reflect the 7.62x51mm cartidge. It also more than tripled bullet speed, to reflect exactly the ballistics of this cartidge.

– Minigun
Still a short-range mower with buffs to accuracy in nearly all ranges and damage as well. You will notice that shooting a minigun in longrange shots is now not a complete waste, because of the accuracy buff. However, to manipulate this beast, the range was reduced, and in melee range, it will still miss plenty of the shots.

– Charge Rifle
Not a powerhouse anymore, but a generally more efficient firearm in nearly every range, including melee. It also has a very low warmup period, becoming one of the quickest short-range firearms with decent damage to boot (just not completely damaging). It is very accurate still, and
compared to other firearms, the charge rifle will put others to shame, with slightly reduced damage, however. The range was increased to better reflect the changes of the firearm.

Finding a game interesting after investing 300 hours into it can become a bit challenging. But with mods as long as there is a new update is assured, you are guaranteed a few more hours of new exciting gameplay. Our website offers you exactly that, a way to breathe life into your Rimworld gameplay through an expansive catalog of Rimworld Mods. Our Rimworld Mods are rigorously tested for all types of bugs and viruses. So that our users would feel safe when installing a Rimworld Weapon Rebalance Mod. If you are feeling bored we have a Rimworld Mod called Alien vs predator for you to enjoy. This mod is based on the commercially successful movie with the same name and offers a plot similar to that of the movie as well. With the mod installed, you play as a race of predators that research, develop, and create new weapons and armors to combat a swarm of aliens. Another mod called the lord of the rims throws you into the lord of the rings fantasy world. This mod when installed limits your technological advancement to medieval times thus eliminating a huge chunk of items, buildings, and techs. The Weapon Rebalance mod will remove and add certain features to make it seem like a lord of the rings game. To add creatures like elf, dwarf, and hobbits you will have to download a mod for each of them through our website. There are still a ton of other transformative mods available on our website that will change the entire map into something new.